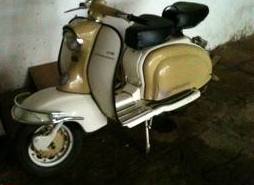 Ever since I re-blogged a post by The Talking Violin (http://thetalkingviolin.com/) on the “retirement” of the vintage VW Van yesterday, I have been thinking of my own childhood and the “autos” that were in use in those days.  My earliest memory is of my whimsical uncle’s Lambetetta scooter (left) which he was very proud and possessive of. Those were the days very few people had two-wheelers, let alone cars, so he considered it his prized possession, never mind me smuggling it out one day only to bang against a tree.
I also recall the two-stroke “Jawa” motorcycle (top) with an extremely irritating tin can beating-like sound. I had always wanted to ride one but never could lay my hands on the neighbours machine.
Then there was the Matador van (above), much like the VW van that has now officially been phased out. This relic from the early 60’s carted students to school, hauled vegetables and was even used as a taxi, besides being used as a mobile food shop.
I also remember the Rajdoot motorcycle (right), crafted out of tin sheets and not iron rods but it was certainly one of the most popular modes of transport in those days.

Coming to the popular taxis, some of which are in use to this day, were the three-wheeled “Tempos”, a snake-like contraption still seen on the roads of Gwalior in Central India (top). They carry as many as 20 passengers from point to point, are heavy pollutants and make a weird, heavy sound.

One genuine relic that is now well and truly part of history is the Delhi motorcycle rickshaw (left), converted from WWII vintage Indian Chief motorcycle the British left when they quit India in 1947. I have had several rides in these awesome machines as a child and later, an a journalism intern in the metropolis.

But one “machine”, if you can call it that, is the “Maruta”, “Jugad” or “Peter Rehra” (right), very popular in Northern India, particularly in rural Punjab. This contraption, very much like the Jeepney in the Philippines, runs on the “Peter Engine” or the water pump used to draw water from bore wells. These are now very slickly made in factories that dot the villages and smaller towns, painted very colorfully and in some cases, even have road-worthiness certificates from the local authorities. Though it’s been several years I rode one, I wouldn’t mind a spin when I visit Punjab in the time to come. I am sure they will be still around, in a more modern avatar by then!